In our geodynamics group, we are interested in many aspects of the long-term evolution of the solid Earth. A common approach we use to understand these complex dynamic processes is geodynamic modelling with data assimilation techniques. In practice, we use both sequential (forward) and variational (inverse) assimilation algorithms to construct the models. A summary of our ongoing research can be seen from the following projects.

1. THE UPS AND DOWNS OF CONTINENTS 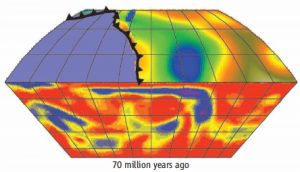 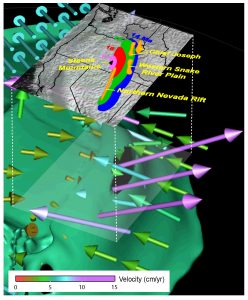 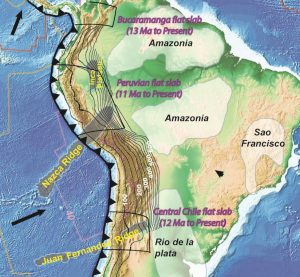 Flat-slab subduction could greatly affect the surface geology of the overriding plate. Yet, both the physical mechanisms and tectonic implications of flat slabs are debated. We attempt to better understand these questions by simulating the past 100 Ma subduction history beneath the South American plate. In order to evaluate the respective contributions of different tectonic elements on the formation of South American flat slabs, we progressively assimilate these features into the forward subduction model and quantify their effects on modulating the slab dip angel evolution over space and time. Our best-fit model provides multiple novel insights on flat slab dynamics, as well as how this abnormal subduction process influence the mantle and lithosphere evolution. Relevant publications: Liu et al. (Science, 2008; Nature Geoscience, 2010); Liu & Zhou (GRL, 2015); Hu et al. (EPSL, 2016); Hu & Liu (EPSL, 2016). 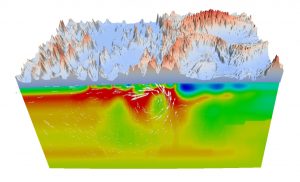 Cratons are long-lived tectonic units within continents, whose evolution is not readily explained by the theory of plate tectonics. We hope to understand the physical and compositional nature of cratonic lithosphere following a multidisciplinary perspective. Questions we ask include how cratons survived geologic times and how they get altered or destroyed. We attempt to find answers to these basic questions by examining their thermal, composition, gravitational and mechanical properties. One example on this research is that we pioneer in bringing a unique geophysical imaging technique, magnetotelluric (MT) tomography, into geodynamic modeling. We find that the electric conductivity of rocks provides an excellent proxy for their mechanical strength. Relevant publication: Liu & Hasterok (Science, 2016); Hu et al. (EPSL, 2017); Hu et al. (Nature Geoscience, 2018). 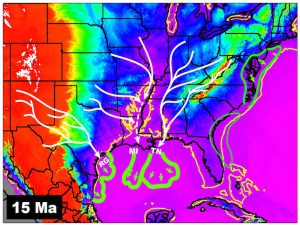 Although it has been gradually recognised that mantle convection induced dynamic topography could modulate surface topography over long-wavelength (>200 km) and large time-scales (~10 million years), the exact expression of these mantle dynamic effects remains elusive. An important reason is that sedimentary stratigraphy that provide high fidelity constraints on dynamic topography is available only at restricted geographic regions. A promising solution to this problem is a coupled landscape-mantle evolution modelling approach, where the sensitive response of fluvial processes to subtle changes of surface topography provides a valuable constraint on the signal of dynamic topography. Eastern North America turns out to be an ideal location for performing this research due to its rich records on fluvial and erosion history (Galloway et al., 2011), which represents one of the newest projects in our group. Relevant publications: Liu (Nature Geoscience, 2014; Rev. Geophys., 2015); Chang & Liu (JGR, in review).

6. RELATIONSHIP BETWEEN SUBDUCTION AND DEEP EARTHQUAKES 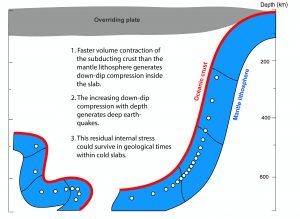 Formation of deep earthquakes remains one of the fundamental mysteries of geophysics. It is generally believed that deep earthquakes are mechanically different from shallow earthquakes due to the high pressure and high temperature conditions at depths. However, none of the published mechanical models could systematically explain all the characteristics of deep earthquakes. We proposed a new mechanical model that involvers the differential contraction between the subducting oceanic crust and the underlying oceanic mantle lithosphere. This model provides a better interpretation of deep earthquake properties than earlier models. Our high-resolution subduction models also provide new insights on earthquake generation within subducting slabs. Relevant publications:Liu & Zhang (EPSL, 2015); Hu & Liu (EPSL, 2016).